The entry list for the 63rd Macau Grand Prix has been announced and Teamwork Motorsport can confirm it will field eight cars in the event’s two esteemed touring car races, the CTM Touring Car Cup and the Guia Race 2.0T (17-20 November).

Over the years, the CTM Touring Car Cup has been the most popular race among Hong Kong and Macau-based racers, but it is also a contest that Teamwork Motorsport has consistently excelled at.

In 2016, Teamwork Motorsport will enter upgraded Peugeot RCZs under the Suncity Racing banner and it will be represented by Paul Poon and Samson Fung who have six Macau Grand Prix victories between them, as well as Alex Fung and Samuel Hsiesh who have both raced to pole positions and race wins in this year’s Hong Kong Touring Car Championship (HTCC) and in recent China GT outings.

The Guia Race 2.0T is also a well-known element of the Macau Grand Prix programme and Teamwork Motorsport will enter two REVO-liveried Volkswagen Golf TCRs, this year piloted by Kevin Tse and Bill O’Brien in the fledgling TCR Asia Series.

The Macau race will bring the inaugural TCR Asia season to a close and Tse lies second in the Drivers’ standings heading into the finale. The Macanese racer has a wealth of racing Road-Sport and GT cars on Circuito da Guia to call upon as he bids for the title, and he will be supported by O’Brien, who has previously raced a Lotus Evora GT4 on the infamous barrier-lined street track.

The REVO VW Golfs will be joined by a pair of Suncity Group Citroen C-Elysees for Alex Hui and Sunny Wong. Nicknamed the “Red Devils”, the China Touring Car Championship (CTCC) Citroens are entitled to compete in the back-to-back Guia Races at the 63rd Macau Grand Prix, but the cars will sport a brand new livery for this ‘East meets West’ challenge.

Teamwork Motorsport Team Principal, Paul Hui, said: “I would like to thank our 2016 sponsors, REVO Technik and especially Suncity Group, as their support is much appreciated. The preparation work for attending the Macau Grand Prix has already begun and our team members are committed to putting on a good, professional show. Finally, I would like to thank AMCC and the Macau Grand Prix for giving us this opportunity to join in this world renowned motorsport event.”

The 63rd Macau Grand Prix will be held from 17-20 November on the famous Circuito da Guia, which winds its way around the streets of the former Portuguese dominion on the South China Sea. 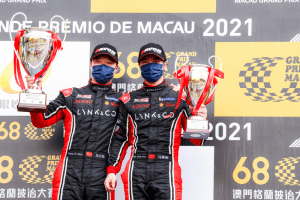 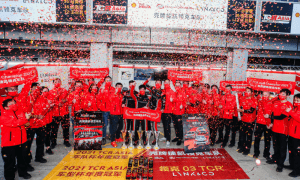